Spoilers ahead for those yet to see the movie.

I finally saw Wonder Woman last night. I already wanted to live on a paradisaical Amazonian island, and this has solidified that desire. The movie was fun, the cinematography was spectacular, I love that she’s a museum curator, and Gal Gadot as Diana and her team do kick a lot of ass very admirably.

You know that there is a ‘but’ coming.

I had been told by a friend that one of the key villains wore a prosthetic over a significant facial scar, so went into the film hoping for a subversive treatment of the disfigurement-as-evil trope, a la Changing Faces’ film Leo.

Unfortunately, Dr Maru (aka Dr Poison), played by Elena Anaya, fits pretty neatly alongside the large number of fictional villains who are marked by disfigurements that either result directly from their evil deeds, or are supposed to act as some sort of spur toward evilness. As raised in a recent article in the Journal of the American Medical Association (JAMA: Dermatology), these are overwhelmingly on the face and scalp as the most visible part of the body on film, and very rarely echoed by comparative representation of classic heroes with facial differences.

Several other commentators have highlighted the negative portrayal of facial difference alongside other disabilities in the film, including Meriah Nichols, Carly Findlay and Erin at The Geeky Gimp. There is an element of the unexpected in the revelation that Ares (the god of war, who has goaded mankind into this conflict in order to reveal their true nature), was not the Bombastically Bad German Enemy but the Mild-Mannered Englishman With A Cane all along, but even this–as Erin points out–relies on the audience making assumptions about a character’s physical limitations translating into powerlessness. 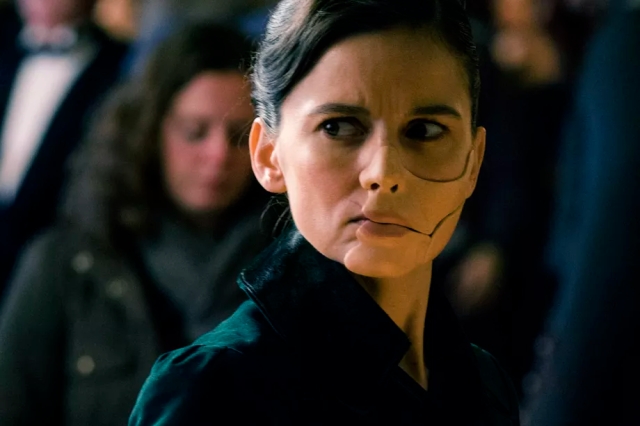 Diana enters World War I after an American pilot, Steve (Chris Pine), crashes his plane near the Amazons’ island, and she decides that she must help the humans by releasing them from Ares’ influence. Once we are outside the homosocial feminist paradise of Themyscira, only three women have significant speaking roles: Diana, Dr Maru, and Steve’s secretary, Etta, who is charged initially with giving Diana a make-under so that she will be less conspicuous than a goddess scantily-clad in armour in 1910s London. Somewhat exacerbating the juxtaposition between Diana and her masked counterpart is the continual focus of other characters on her attractiveness: even as Steve attempts the classic film move of making a woman dowdy by giving her spectacles (guest post on spectacles as a disfigurement in the 19th century coming soon!), Etta points out that she is still “the most beautiful women you’ve ever seen”. 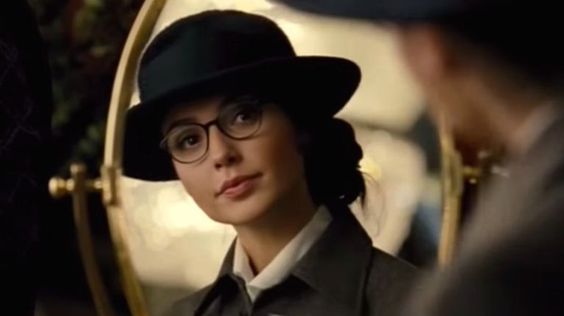 The point also arises as Steve attempts to charm his way into Maru’s confidence while disguised as a German officer at the ball. When Diana enters in a knock-out gown, Maru immediately spots that she has lost Steve’s attention to a more classically attractive woman.

I wondered if Maru’s facial mask was perhaps a nod to the now well-known masks produced for soldiers disfigured in WWI, such as those crafted by Anna Coleman Ladd in her Paris studio (follow the link to film footage of her workshop). We are reminded of the effects of the war on the soldiers’ bodies both within the battle scenes, and more poignantly as Diana, Steve and the others cross paths with men disembarking from the hospital ship. The destruction of gas masks, with melting leather and shattering glass, is also the image repeatedly used to show the viciousness of the poisonous gases Maru has developed, drawing focus to the physical face. 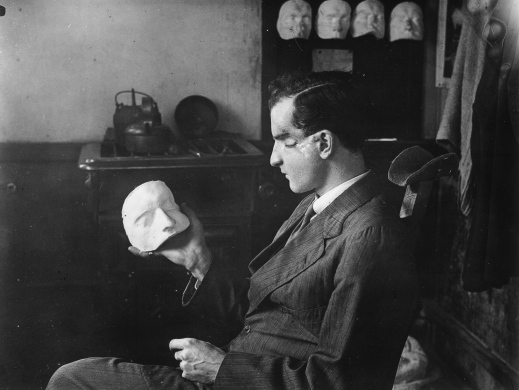 The character is one of Wonder Woman’s oldest nemeses, and has been through several different iterations through the comic’s history. In an interview, Anaya said that she had created her own backstory for Maru that directly attributed her disfigurement to previous experiments, but the film itself leaves this open to different possibilities. Only a very small scar protrudes from behind Maru’s mask, but the fissure that allows it to move disrupts the otherwise smooth appearance in a dark scar, and is angled downwards, creating a permanent frown.

In the film’s climax, Maru’s mask breaks off in pieces in the wind, as Diana stands over her and must decide whether to let her live or die. The join in the mask is echoed directly, more dramatically, in the line of the scar on Maru’s face. Ares echoes Diana’s mother in telling her that “they do not deserve you”, and drawing attention to the violence and destruction wreaked by people like Maru. I think that Maru’s unmasking at this point stands in for the vulnerability of all humanity, which in this film humans have competed to compensate for through technology: not only a war of “weapons deadlier than ever before”, or Maru’s poisons and prosthesis, but also photography that seeks to immortalise us, the “hideous” pollution and infrastructure of post-Industrial Revolution “jolly old London”, and the wristwatch that, as Steve has to explain to Diana, tells us when to eat, sleep and work. In protected, Edenic Themyscira, in contrast, all of the Amazons’ energies for development are spent on their own super-able bodies, which exist out of time. Later, as an immortal curator at the Louvre, Diana can bear witness to the rapid supersessions of our technological innovations (as well as our bodies), as the weaponry of ancient Greece sits in her office alongside the faded glass plate photograph, and Steve’s now antique watch.

In dwelling on Steve’s love and sacrifice, sparing Maru, and fighting Ares instead, Diana ultimately sides with we poor, fallible humans, setting her up to protect us in films to come. As a film, it’s a great deal of fun, and there have been ample stories recently of girls inspired by the strength of Diana and her female warriors. But it didn’t need the scars.

Facing the Past
genders, bodies, politics

Vision and Eyesight Across Time and Cultures Workshop, 2018

Support and sanity for early- and mid-career researchers

Welcome to my blog! I am an academic historian of medicine and the body, and 2014 AHRC/BBC 'New Generation Thinker'. Please enjoy and let me know what you think.

Exploring gaols, bridewells and other forms of detention, 1500-1800

From Medieval Europe to Contemporary Australia

(un)writing the book, the book unbound